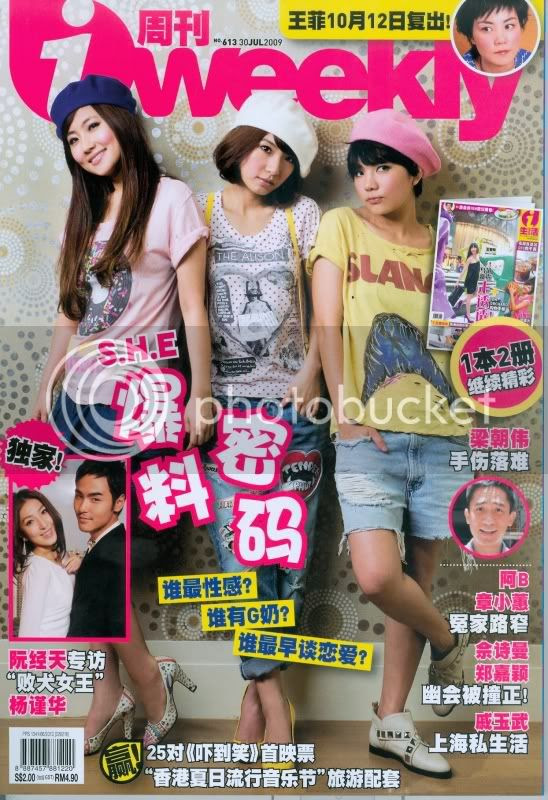 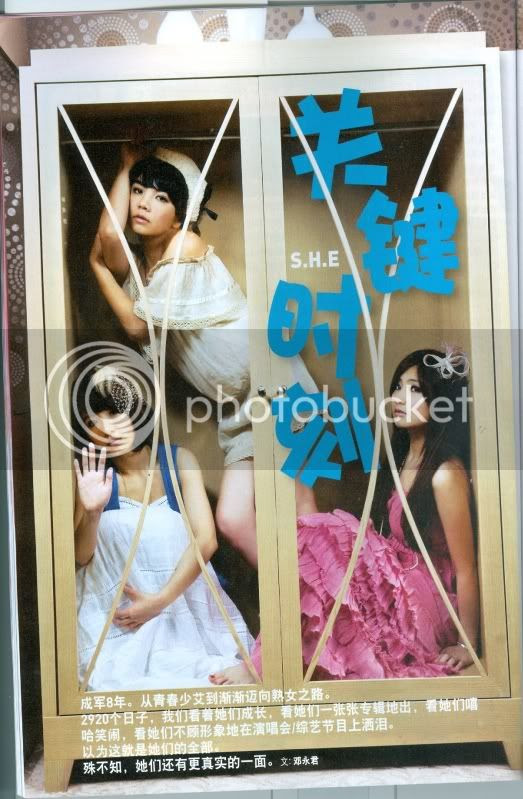 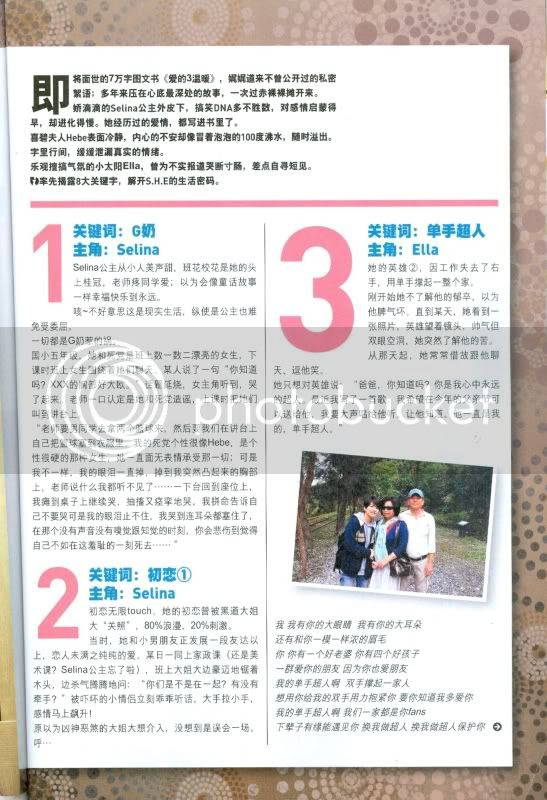 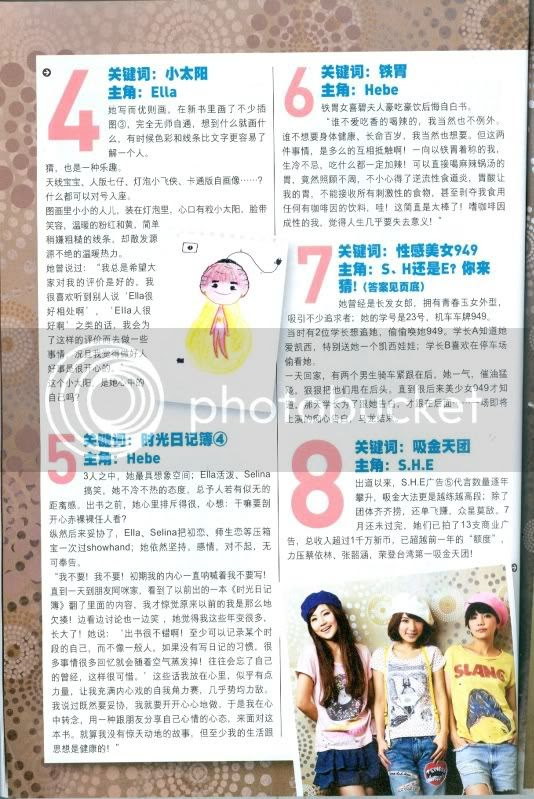 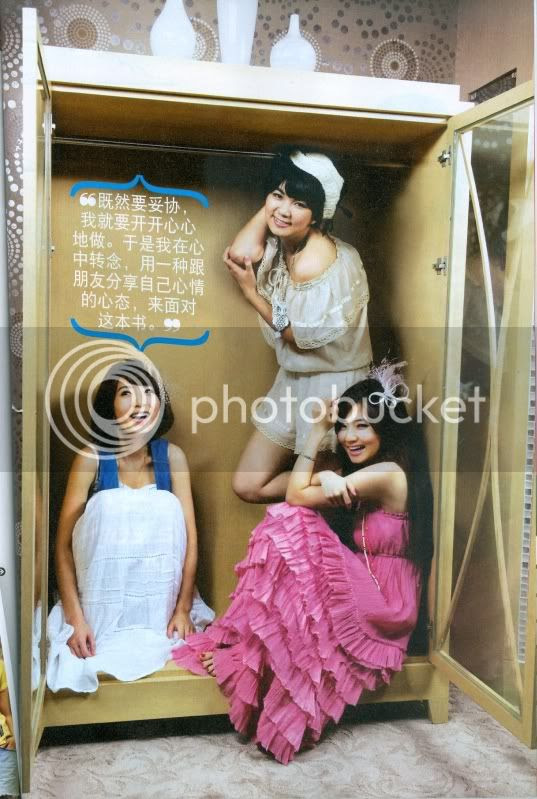 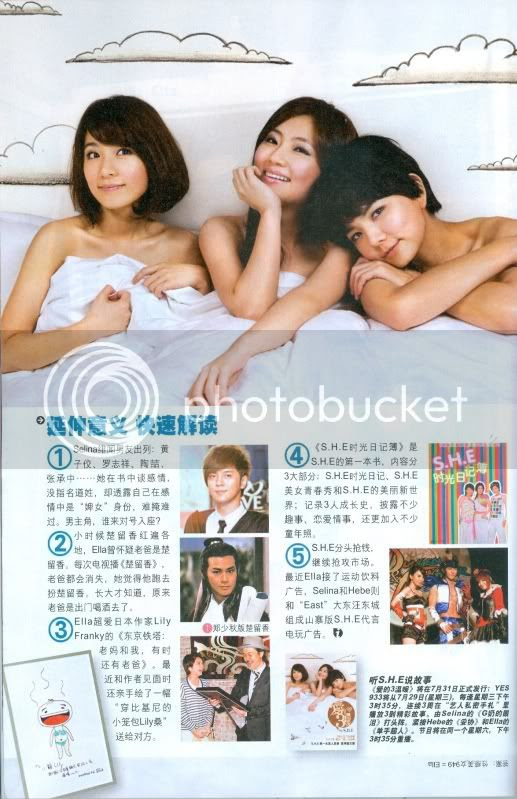 Cover: S.H.E Reveals Passwords
Who is most sexy?
Who has G-cup breasts?
Who was the earliest to fall in love?

A group for 8 years. From young girls gradually turning into matured young ladies. For 2920 days, we witnessed their growth, seen them release albums after albums, watched them laugh and make merry, and noted how they shed tears, unpretentiously without a care for their “image”, during concerts and variety programmes.

Just when we thought we have seen them all, never did we expect there is yet another honest side of them, unknown to us earlier.

The new book – [Spa of Love], which is about to be launched, is a pictorial book with over 70,000 characters. In the book, the trio will share secrets and thoughts unknown to many; and they will also bare their souls on some stories deeply buried in their hearts.

Beneath the demure disposition of Princess Selina hides an abundance of hilarious DNA. Although she might have fallen in love early, subsequent development was slow. She shared on many of her past romances in the book.

Under the aloof appearance of Madam XiBi Hebe, holds tension of unease akin to water at its boiling point which threatens to overflow any moment. Amidst her words, her real feelings were uncovered gradually.

Meanwhile, the optimistic Little Sunshine Ella, with flair at hyping and cheering up the moods of everyone, revealed on how she broke down due to untruthful media reports and also, her once suicidal thoughts.

i-Weekly will first reveal 8 Keywords to unveil the passwords to S.H.E’s lives.

Since young, Princess Selina was born with sweet looks and vocals. Thus, she was often named the “Belle of the Class / School” and her teachers and classmates would dote on her. Like fairy tales, she assumed that everything would be “happily ever after”.

*Coughs*~ But sorry to say, this is reality. Therefore even princesses have to undergo difficulties.
And it all boiled down to the fault of “G-cup breasts”.

“The teacher wanted the boys to go fetch 2 basketballs. Then we were to put the basketballs under our blouses. My close friend’s character was like H, who is very stubborn and hence remained expressionless throughout the whole ordeal. However I am different from her. My tears just kept falling onto my “bloated chest”, and I couldn’t hear a single word my teacher was saying… After we returned to our seats, I just leaned onto the table, and continued to cry and choke. I tried my very best not to cry, but my tears just could not stop. I cried so hard that my ears were blocked. At that very moment when you lost all sense of hearing, smell and touch, one would just feel so sad that you wish you could die at this very moment of shame…”

A first love with unlimited “touch” element. Her first love was under the “care” of a gangster big sister, with a feel of 80% romantic and 20% excitement.

She and her little boyfriend were at the stage of an innocent relationship of “beyond friendship, but not yet lovers”. One day, during Home Economics class (or rather Art class? Princess Selina has forgotten), the gangster-like big sister in their class looked over at them fiercely while sawing a piece of wood, “Aren’t you both supposed to be together? Ever held hands before?” The frightened young couple who was startled by this immediately heeded her advice to hold each other’s hands, and as a result, their relationship upped by leaps and bounds!

As it turned out, they had mistaken the fearsome gangster-like big sister was trying to intervene in their relationship . Phew…

Her hero, may have lost a right arm due to workplace accident, but yet he single-handedly raised the whole family.

Initially she could not understand his anguish and thought he was merely bad-tempered. Until one day, she saw a photograph – her hero was staring into the camera. He was still handsome-looking but there was an empty look in his eyes. Suddenly she realized and empathized with his pains. From that day onwards, she often seized the chance to chat with him, and to cheer him up.

She only has this to say to her hero, “Father, do you know, you are the Superman in my heart forever! Recently I wrote a song. I wish to dedicate this song to him during Father’s Day this year. I wish to sing this aloud and let him know - he will always be mine, my One-Armed Superman.”

She is talented, not only in writing, but also in drawing too. She contributed many sketches in the new book, all of which are self-taught. She was inspired and drew whatever that came into her mind. Many a times, colours and lines make it easier to understand a person than words.

Guessing, can be a joy too.

Sketches of Wired-Baby, Human Version of CJ7, Light-Bulb Little Flying Hero, Cartoon Version of herself…? Everything seems to fit whatever comes to your mind.

The little character in the sketch seemed to be inside a light-bulb. It has an image of a little Sun at its heart, a smile on its face, glowing in warm colours of pink and yellow. The sketching may be simple with untouched-up lines but it gives off a constant flow of warm energy.

She once said, “I hope that everyone’s comments about me would be positive. I like to hear positive comments from people, for instance - Ella is nice to get along with. Ella is very nice etc. Such comments will also motivate me to do certain things. Furthermore, being nice and doing good deeds makes me feel very joyous.”

The Little Sunshine in the sketching is perhaps, a reflection of her true inner self.

Amongst the trio, she leaves the most to others’ imagination. Relative to Ella’s bubbly-ness, Selina’s hilarious antics; her lukewarm attitude seemed to draw an invisible distance. Prior to the production of the book, she was actually very against the idea. She thought: Why should I bare my soul to others?

Despite so, she eventually gave in. Ella and Selina had done a “show-hand” to share on their first love and teacher-student love experiences etc, but she was insistent not to share on that. Relationship, sorry, that is a no-no.

“I don’t want to! I don’t want to! Initially I was screaming in my heart I don’t want to write anything! Till the other day when I was at a friend’s place and saw the [Daybook S.H.E] released years back. I flipped through the pages and realized just how ‘irritating’ I was in the past! I was semi-reading and laughing. My friend felt that I had changed and grown up over the years! She said, - ‘ It’s not a bad idea to release a book! At least you could record a part of yourself during a certain period. This is unlike some people, if they do not write a diary, a lot of things and memories would just disappear one day! And they would forget about a part of their experiences over time. This is a pity.’ Her words seemed to add power to the already existing tug-of-war in my heart. I thought since I am giving in, I might as well do it happily. Thus, with a change in perspective, I adopted an attitude as though I am sharing with a friend in the book. Although I might not have any impactful stories, at least I could share on my healthy lifestyle and thoughts!”

“Who doesn’t like to binge on good stuff? I am no exception of course. Who doesn’t want to have a healthy body and live up to a hundred years? I would want that of course. But these are 2 conflicting issues! Self-proclaimed as one with an ‘iron-stomach’, regardless cold or raw, I want all my food to be spicy! My stomach can take soup directly from the Ma-La Spicy hotpot, but with a lack of care, I actually contracted Gastroesophageal reflux disease (GERD) (based on online translator). The gastric juices caused my stomach no longer able to take in spicy stuff and even resulted in me no longer being able to drink anything with caffeine. Wah! This is just ‘fantastic’! I, being a caffeine-fanatic, suddenly find that life has almost lost its meaning for me!”

She used to sport long hair and with her demure disposition attracts hordes of suitors. Her class register number is 23, and her scooter’s plate number is 949.

Once, 2 of her seniors were interested to woo her and secretly called her “949”. Senior A knew she likes "Cathy Doll" and specially bought her one as a gift (based on online translator – image found of Cathy Doll - http://goods.ruten.com.tw/item/show?11090322167798 ). Meanwhile Senior B would often hide in the car park to steal glances at her.

One day, on her way home, she noticed 2 boys riding on their scooters, chasing after her. Angered by this, she stepped on her accelerator and picked up speed, leaving the 2 boys far behind. It was until much later did Pretty Babe 949 learnt that on that particular day, both seniors were really chasing after her, wanting to profess their love for her… Alas, an almost devoted profession of love ended just because of the misunderstanding.

Since the trio entered the entertainment scene, SHE’s commercial endorsements have been on the rise and their skills to attract the gold-pot seemed to be getting more proficient each time. Other than taking on endorsements as a group, they also take on endorsements separately. Thus, not many artistes are their match. To date, before the end of July, they have already filmed 13 advertisements and earned over S$10,000,000, way above their limit in the previous year. They have overtaken Jolin Tsai and Angela Zhang to become Taiwan’s Number 1 Gold-Attracting Heavenly Group so far!

1. Listing of Selina’s rumoured-boyfriends: Mickey Huang Zi Jiao, Show Luo Zhi Xiang, David Tao Zhe, Zhang Cheng Zhong… She mentioned her romances in the book but left out names. However she could not hide her sadness, as she revealed that her role in the relationships have been akin to that of a “maid”. As for the male lead, we wonder who would fit the bill?


2. When she was young, [Chu Liu Xiang*] was a popular TV serial everywhere. Little Ella once suspected her father was Chu Liu Xiang because each time the TV telecast of the serial started, her father would disappear. During then she thought her father had gone to act as Chu. It was only when she grew older, Ella realized her father had merely gone for his drinking session with friends then.

* Chu Liu Xiang is a classic period drama / novel character – suave, witty, highly-skilled, and chivalrous hero. Ladies are all mesmerized by him.


3. Ella likes Japanese author – Lily Franky’s autobiographical novel - [Tokyo Tower: Mom and Me, and Sometimes Dad] very much. Recently during a meet-up with the author, she specially drew a sketching of “Xiao Long Bao Lily-sang in Bikini” as a gift for him.

* Xiao Long Bao is a Chinese delicacy – soup in meat dumpling, which many locals and tourists, especially Japanese love to eat.


4. [Daybook S.H.E] is S.H.E’s first book released. The contents were separated into 3 sections: Daybook S.H.E, S.H.E Youthful Girls Show, and S.H.E Beautiful New World. The book documented on the trio’s growing up years and many funny experiences and their early romances. It also included many of their childhood photos.


5. S.H.E’s separate ventures to earn money. Recently Ella took on the endorsement for a sports beverage while SH and “East” Jiro Wong turned into “pirated version S.H.E” to take on endorsement for an online game.

===
i laughed when i read the part about 'Sexy Pretty Babe 949' and Ella suspecting that her Father is Chu Liu Xiang!! LOL! xD
Posted by kimuchi08 at 7:31 PM