Calvin Chen for his drama continues training, not afraid of a burst liver 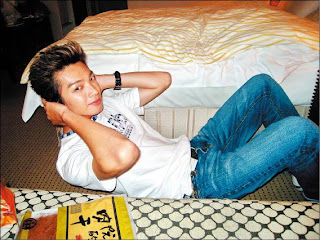 Calvin Chen from the drama acquires the ability for instant sleep, even though he is so tired to the point his liver will explode he will not forget his muscle exercise.

Calvin Chen at the same time is filming two drama's; Momo Love and Love buffet, from Taipei to Changhua running back and forth continuously, candles burning from both ends. Even though he is so tired that his liver might fast explode, while in Changhua he secretly trains, everyday he wildly exercises doing 300 sit ups, breaking away from his gentle image to become a fierce muscle man!

For Momo love shooting he trains his body

Hardworking Calvin Chen in Changhua is shooting love buffet, in the hotel room he is staying in, spread out over his dressing table are full of vitamin tablets and chicken essence. Successively filming two dramas, he doesn't find it hard but is tired from rushing between the two locations, resulting in having only 4hrs sleep each day, finally training his powers to be able to sleep while standing.

Even though he is so tired to the point where his liver will explode, Calvin will not forget to do his sit-ups, doing 300 sit-ups un-interrupted. It was actually later revealed in Momo love there is a scene where his top half of his body is exposed, "How can I not train?", perhaps at this moment it can't compare with Wu Chun's and Jiro Wang's "Big muscles", Calvin rubbing his stomach said "A 6-pack should appear soon!"

Since childhood he has been a city child, Calvin filming in Yuanlin (in Changhua) in the rural area where there isn't much entertainment, went searching for fun himself. With Arron Yan and Joanne Tseng the three went to visit the night market and bought quite a lot of goods; 3 sunglasses only costing $200 NT, dried guava and pickled plum lollipop, filling his room with all his childhood memories.