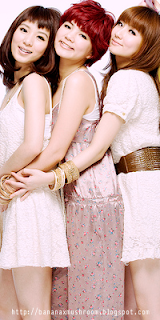 S.H.E is a Taiwanese girl group consisting of members Selina Jen, Hebe Tien and Ella Chen. They debuted with their first album on September 11, 2001. Their debut coincided with the 9/11 attack in New York and therefore many thought that they won’t last long and be popular. The media thought that their debut will be overlooked by the news of the attack. S.H.E has proven all of the skeptics wrong for they are still standing strong even after 10 years of being in the music industry. Due to their popularity a lot of other girl groups have been formed through the years also but not one of them stood a chance against S.H.E or lasted as long as them.

Selina, Hebe and Ella joined the singing contest "Universal Talent and Beauty Girl Contest" in 2000. Selina won the competition and was awarded a record contract by the music company. After the competition, HIM International (previously 宇宙唱片) contacted Ella and Hebe to audition again. After a few test recordings they were signed a record contract from HIM and joined Selina to form S.H.E.

All three have different vocal ranges that complement each other. Ella sings alto to mezzo soprano while Hebe and Selina sing mezzo-soprano to soprano. Their songs are mostly about love. The word "love" (Chinese: 愛; pinyin: ài) appears in six song titles and over 270 times in the lyrics alone. "Love" in English also appears in 3 song titles and numerous times in the lyrics. Other words that usually appear in their songs are "embrace" (Chinese: 擁抱; pinyin: yōng bào) and "feeling" (Chinese: 感覺; pinyin: gǎn jué).

During their career, S.H.E has released 10 studio albums, 2 compilation albums and 1 digital album. They have conducted 3 major concert tours: Fantasy Land Tour, Perfect 3 World Tour and S.H.E Is the One World Tour. The group has acted in seven drama series, hosted two variety shows, and contributed 10 songs to six drama soundtracks. They have endorsed more than 40 companies and products as a group and solo including Coca-Cola, World of Warcraft, Levi's, L'Oreal, Top Girl and 7-Eleven.

Selina's younger sister intially wanted to join the "Universal 2000 Talent and Beauty Girl Contest" but she was too young. Instead, Selina joined in her place. After winning the contest she was signed under the the label HIM International Music to be a member of S.H.E

On 29 May 2010, during S.H.E's Taipei Concert, her boyfriend (now husband), Richard Chang, proposed to her. They were supposed to get married on April 2011 but it was postponed after the October incident. They had their wedding on the 31st of October 2011, Selina's 30th birthday.

On 22 October 2010, Selina suffered 3rd degree burns on 54% of her body during the filming of her movie "I Have A Date With Spring". To date, she is still recuperating and doing physiotheraphy but is doing better now.

Encouraged by the staff of "Cruel Stage", Hebe joined the "Universal 2000 Talent and Beauty Girl Contest" which had about 1,000 contestants. Unfortunately she didn't win, but the company held an audition for the seven remaining contestants following the competiton. The show's manager appreciated her powerful vocals and as a result, Hebe was invited to become a member of S.H.E

Throughout out her career with S.H.E, Hebe has contributed two solos for the band's albums and two solos for a drama soundtrack. After 9 years in the music industry, she released her first solo album, To Hebe, in 2010. It was well-received from fans and reviewers alike that she released her second album, My Love, exactly a year after the first album.

Intimated by the number of contestants, Ella almost gave up before the first round of "Universal 2000 Talent and Beauty Girl Contest" but her sister convined her stay. Though she didn't win, she was signed on as a member of S.H.E after test recordings were done. She is noted for her strong and beautiful deep voice.

Ella has composed multiple songs during her career and is also very active in her acting carrer. She has two successful dramas and two movies to be released on 2012.

On 27 August 2007, after her pug, Qiang Qiang, died Ella released a solo EP with the same name and includes a self-penned, self-composed song dedicated to her pet. All profit from her EP went to animal shelter associations.