Ella's grand father passed away on the Thursday morning 10++ A.M. As it is sepsis due to acute leukaemia, Ella's grand dad passed away at Ping Tung Hospital at the old age of 84 years old. As the news was passed out, Ella, who was filming for an advertisement at Guangzhou was very devastated and had a great cry. She can only hold her tears back during her work and sadly grief to continuing herwork.

As previously, their record company were on a trip to Bali, enjoying the sea breeze, blue skies, Ella was the only one who wasn't around. Actually, it was because during that time, she had to be at National Taiwan Hospital to take care of her grand dad. She was there almost everyday, and even bath her grand father. She told her grand dad, "When I was young, you are the one who also bathed me..." As tomorrow, her schedule requires her to be at HongKong for 3 consecutive days for her DWL promo. Fortunately, as agreed by the working production crews, she will only attend one of the meeting and rush bck to PingTung.

Yes, that's right. My grand father has passed away, very peacefully and quietly without any pains. Since I was young, my grand father never once hit us(grandchildren), and seldom scold us as well. He treats his grandchildren very well. When I just got into my junior college, my grandfather would pick me up from school. This is one of the most memorable times I have had with my grandfather. My grand dad is very blessed, hence, God did not let him suffer any pains for a long time. Thanks to everyone for your concern. I'm good, because I believe, my grand dad will bless us from Heaven!.
----------
RIP GrandPa Chen. Be strong Ella! We will always be here for you. It's really sad that one of Ella's wishes didn't come true. =((
Posted by kimuchi08 at 3:14 PM No comments:

Wu Zun Tells Ella to be Careful of Her Boyfriend

Wu Zun became the spokesperson for a female facial cleaning product lately. Yesterday he came to Hong Kong to attend to a promotion event in Tsim Sha Tsui. He played games with hundreds of fans and performed magic.

Wu Zun expressed as a male, he didn't get to know facial care in depth in the past and never put on facial mask with girlfriend together. However, he praised he is pretty good at cooking. He is best at making pasta and western dessert. His girlfriends also praised him after trying the food he made.

S.H.E's Ella is said dating a rich guy. As her good friend, Wu Zun said because he has been busy filming in Shanghai and Okinawa, he hasn't returned to Taiwan for two months. He never heard Ella talking about it before. But next time when they meet, he would definitely ask her about it. He said: "If it's true, I would congratulate her. She also hope to find a right person. It's a good thing to have boyfriend/girlfriend."

Wu Zun joked he saw picture of Ella's boyfriend and felt they look good together. He also know Ella stresses on inner beauty and believes the boyfriend she picked must be the best. But talked about Ella's boyfriend is said hugging hot girls, whether he would tell Ella to break up with her boyfriend? Wu Zun said: "Never heard of that. If the guy is not good, she should be careful."

"Actually this... this news I really had no idea. It's because a staff from Taiwan came and they had bought some taiwan magazines. And then I saw it, and then got to know this news. And... of course I also don't know... if it's real or not (look at how Chunnie say 'shi zhen shi jia', to me, it looks suspicious with his expression) yeah because this thing... unless wait until I meet Ella in person, I'll just ask her directly." (Oh my god, nobody ask him to ask her in person but he just say he'll ask her directly! This means he really cares for her!)

Chun said he'll congratulate Ella if the news is true. That's like the same answer he gave during DJ era.

Chun, Ella is already in Taiwan. Go back in Taiwan now so that you can "ask her personally." Make sure to cheer her up also!

Although I kind of think you already cheered her up when she was in Macau and you were in HK a few days ago. Hehehe. :P

One more thing, Chun wore the B&R watch during the Ponds Event! =DDD 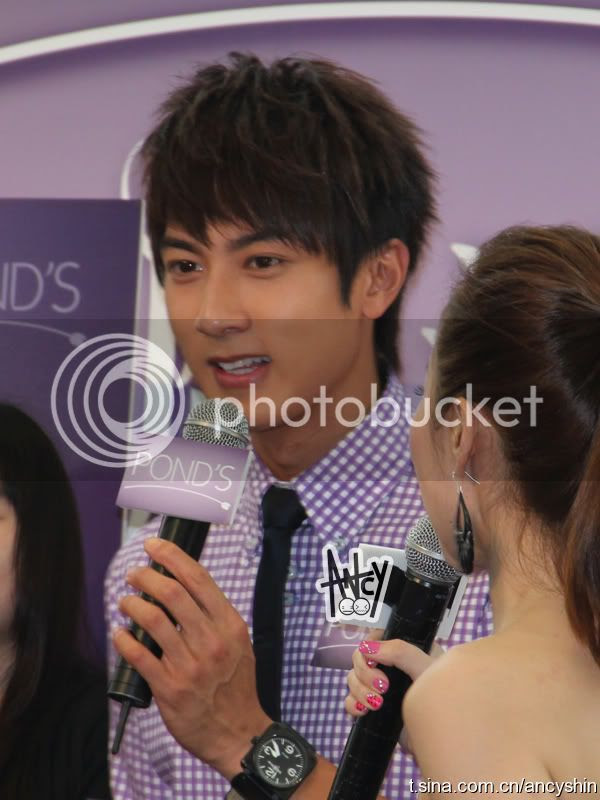 credits as marked
Posted by kimuchi08 at 4:37 PM No comments:

Ella (left) in S.H.E has the most roughest love road. In the picture which exposed Selina's boyfriend Zhang Yan Zhong, proposed to Selina during the concert, making Ella to shout in envy, also shouting that to have a boyfriend like him, in fact, she has already a secret relationship. "One Weekly" reported that in reality, Ella has a mysterious boyfriend nearby, Tommy, Zhao Shi Yi, is the formal Taiwan Stock Exchange GM Zhao Xiao Feng. As he doesn't wish to reveal this relationship, they both dated secretly for a year. "One Weekly" continue to observe for months, as long as Ella is in Taiwan, she will meet her boyfriend's house at midnight for a date. But Zhao Shi Yi took advantage of the moment when Ella went overseas, and brought a hot girl to Taiwan Love Motel to open a room, causing Ella have not yet to publicize the relationship before she was cheated.

On July 10 when Ella was in Jiang Su having her concert, Zhao Shi Yi and his friend have dinner together till past 1 in the morning and then left. Later Zhao Shi Yi did not feel anxious going back home and he went to a pub and pick up a long hair hot girl to his car, driving all the way to Taiwan Love Motel, staying there for two and a half hour and then leave. In S.H.E, though Ella may look to be open and bright, but her love road does not go smoothly. Thing which makes her hurt the most, is the relationship with Josh Chen. Ella changed into her lady style because of knowing him liking girls with huge breasts. After their relationship was exposed, as they suspected each other broke the hype (I think it's somehow this meaning), and they broke up. Ella also found out during when they are dating, Josh even hook up with his assistant, also even with his old lover who has F size cup breast, and then only did she know that she is foolish and naive.

As for the relationship with Zhao Shi Yi that had been exposed, Ella said, "He's just a friend that easy to talk with, last year after the [Music of Life] activity, we got to talk more, and we have more contacts." But for Zhao Shi Yi, he just admitted this relationship, "We have been dating for quite awhile, she is really a good girl, we are very serious in this relationship." As for being found out of cheating, he denied and said on that day he lend his car to his friend, it's not him.

Next magazine exposed in S.H.E, not only Selina Ren is currently dating someone, Ella Chen is photographed meeting boyfriend at night secretly. Whenever she is back to Taiwan, they will hold their chance of meeting each other. The report said Ella's mysterious boyfriend is Tommy Chao (趙士懿) and he is a rich mister in the finance industry. But as this relationship is exposed, the media recently photographed him driving a hot girl to motel with his Porsche.

As for the report above, Tommy Chao generously admitted to the magazine that he is indeed seriously dating Ella now. But he denied bringing girls to motel. He explained because he let his friend borrow his car, expressing the media just photographed his friend. As for Ella, she calmly expressed she and Tommy are just good friends.

Although Ella has an outgoing personality, but her love life has been rough. She was rumored with many people, including Wu Zun, Jerry Huang Zhi Wei Barron Chen Chu He. Good sister Selina already found her love, of course she would also hope Ella can find her Mr. Right.

The magazine reported Tommy's father is the former general manager of Taiwan Stock Exchange Corporation. He was introduced to Ella through Selina's boyfriend Richard Chang (張承中). It's known the two has been secretly dating for more than a year.

I'm actually not in the mood to post anything since I'm quite upset about this news. I feel sad for Baobei also. I so hate Apple Daily!!!

I saw some photos of her arriving in Beijing (for DWL promotions) and she looks really tired and sad. Gahh, I hate Apple Daily and other people who always hurt Ella!

And this guy, why did he admit that he and Ella are really in a "serious relationship" but Ella just said that they are only friends?! On my opinion, he doesn't seem to be the type of guy Ella likes.

Apple claimed that they have been observing Ella and this guy for months but how come they don't even have a picture of them together? All the pictures they have on their magazine, they're not even together.

Oh, and just so you guys known, Ren Ma and Ren Pa (Selina's parents) posted this on their wiebo:

Translation by Betty @ http://chunellafc.phpbb9.com/
"Today's rumor actress. It really hurts that she had to face such an irritating news and had to be serious in her work to shoot till in the middle of the night, and morning had to fly back to Bei Jing. Really very reluctant to her. Chen Jia Hua, you have to be strong and pursuit for your true love. Love you!"


They told her to pursue her true love meaning this one is fake. I'm not believing this until I hear Ella's response/ clarification.
Posted by kimuchi08 at 10:56 AM 2 comments: