Ella Transformed into a Bullied Chibi-Maruko-chan 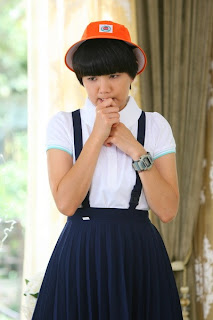 Note: Please credit wyn0602 of CEFC for translation of article and do not edit any parts of this article. Please quote this translated article (including this note) in its entirety. Thank you for your co-operation.

Ella, who had not been in any drama for three years, was so enticed by the role of the down-and-out rich girl Yang Guo that she gave in to her acting bug. Since filming started, not only did she often bemoan the fact that while she really liked the role of Yang Guo and that she could act to her heart’s content, she also had to sacrifice greatly – not only had to suffer being burnt to a crisp under the 40 degree high temperature, she also had to sacrifice a great deal of sleep, even her image had to be sacrificed. Yesterday afternoon, the production team revealed to the media the amusing story of how Ella was transformed into a bullied Chibi-Maruko-chan in the drama.

The Scene of “Ella-Maruko-chan” Had Everyone Laughing
A yellow hat, a white blouse with round collar, a royal blue pleated skirt, white socks and black shoes…when Ella arrived to the set after the change of costume, she immediately had everyone on the set burst out laughing. Everyone unanimously agreed that Ella looked just like Chibi-Maruko-chan. Upon hearing everyone’s surprised responses, “Ella-Maruko-chan” shyly bowed to everyone: [Thank you! Thank you!]This scene was depicting Yang Guo imagining herself as a pitiful Chibi-Maruko-chan when she was being scolded by Auntie Qi (Zhong’s mother). Because it was supposed to be an imaginary scene, therefore, the performance must necessarily be more exaggerated and comical. The actress portraying the mother pointed a finger at Yang Guo and scolded harshly: [Look at you…this waist…aiyo, so thick that I don’t even know what to say…and this face…” Ella would put on various expressions such as pouting with her head bent low or squeezing all her facial features together or biting on a finger or looking scared. Her exaggerated cartoon-like expressions had everyone on the set painfully controlling their urge to laugh. As soon as the director yelled [Cut], everybody immediately burst into laughing uproariously, even Ella herself was bent with laughter. When she looked at the replay, the Chibi-Maruko-chan clad Ella asked the director with trepidation: [Director, is this OK?] Director Ke pondered briefly and replied: [I think there was too much detail, too scattered. Why don’t we do this one more time? This time, slightly more concentrated.] “Ella-Maruko-chan” wailed: [One more time! There really goes my image now!]

Off-screen Ella was the “Empress” that Could Read Palms

Just before the start of shooting the night scenes, the crew suddenly heard someone singing [Eyebrows as high as the sky, lush cheeks full of light]. It was Ella in a T-shirt, jeans and flip-flops, singing the theme song to an old Taiwanese drama [Empress Wu] and walking in with a slow and deliberate swagger. No matter how they looked at her, Ella’s “girl-next-door” get-up was simply incongruous with that of the almighty “empress”, and the crew started laughing uncontrollably. However, despite the laughter, Ella immediately enjoyed “Empress”-like treatment as Jerry Yan, who was sitting on a sofa memorizing his lines, obligingly took up a piece of wet Kleenex and started to wipe her feet.In the drama, Yang Guo’s father was a famous feng-shui master. Perhaps it was due to such influence that between takes, Ella became an amateur fortune-teller. She grabbed Taiwan actor Michael Zhang’s hand and suddenly exclaimed loudly: [Aiya, you have broken-lines on your palm. I heard that it is very painful when hit by people with broken-line palms.] As she continued to look, suddenly Ella grabbed Michael Zhang’s arm and started to gnaw on it. She even looked around in satisfaction while murmuring to herself: [Although you have a broken-line palm, your flesh is still quite tasty….]

===
Haha, Ella is really cute! And Ella-Maruko-chan way is cuter than the Chibi-Maruko-chan! xD