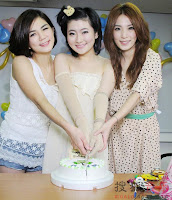 A decade since Taiwanese pop group S.H.E was formed, members Selina Jen, Ella Chen and Hebe Tien reunited for a commemorative 10th Anniversary video which was posted on the trio's official website.

The reunion was particularly poignant as Selina Jen was still recuperating from a serious burn injury which occurred last year.

In a separate event, Ella showed up at Hebe's album autograph session with a live size cutout board of Selina to root for her.

"I'd like to thank the person who made the cutout. We can now pinch and scratch Selina as much as we'd like to," said Ella mischievously.

Speaking on Selina's earlier show of support on her blog, where the starlet had posted a picture of herself posing with Hebe's latest album, the singer expressed thankfulness.

"My press conference didn't even make the headlines but the media gave a heavy coverage of my album when Selina secretly posted the photos. She's a great supporter!"

Hebe and Ella also revealed that Selina is in the pink of health currently and would be getting married next month. The two are slated to be Selina's bridesmaids for the occasion.