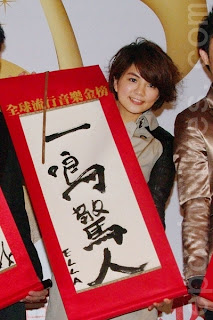 Female group S.H.E’s member, Ella, attended the [Global Chinese Music Awards] press conference today. When asked by the media on the news regarding Selina’s intended public appearance, Ella even stifled momentarily and shared, “Plans are in the pipeline.”
The [Global Chinese Music Award], jointly organized by Hit FM and MusicRadio, held its press conference this afternoon. Singers Ella, JJ Lin, Wilber Pan and others graced the occasion and sent their well wishes.

In response to media’s queries on recent talks about Selina being discharged from the hospital, Ella shared, “The lunar new year is approaching, one will definitely wish to spend time with your loved ones. By being able to stand before everyone, it would mean that she is really ready. Although I will be concerned, I will not be unduly worry. There will, of course, be situations and things we would have to face nonetheless. And the courage to face all these will only mean that Selina is a true SHERO.”
When probed by media if Selina would hold a press conference, Ella clarified, “I am unsure. But should there one, the recording company would state so.”
When sharing on Selina’s current condition, Ella revealed, “Selina is a lot more resilient and brave than many others would imagine her to be. Her progress of recovery is also better than what the doctors have predicted.” However Ella has not forgotten to remind everyone to please give Selina more privacy and space in meantime too.

There were recent talks that Selina, who was injured while filming an explosion scene last year, has plans to make a public appearance just before the lunar new year. In response to this, fellow S.H.E member, Ella, said if Selina has decided to do so, it would signify that she is fully prepared and courageous to face what may lie ahead, and Ella would definitely give Selina her utmost support.

In October 2010, Selina was injured while filming an explosion scene for a drama in Shanghai. As a result of the accident, 54% of her body suffered severe burns. After undergoing 3 months of treatment, her condition has already stabilized. Selina’s parents also confirmed through the media that she would return home to celebrate the lunar new year, and has plans to express her appreciation to the public for their concern during this period.

Selina’s close sister, Ella, replied that she is unsure of the details for the probable press conference. However she believes that so long as Selina is mentally and psychologically prepared, she would face everyone with courage. Being her close friends, Ella and Hebe will also be by her side forever. Ella added, “I feel that Lao Po (wife aka Selina) is very positive and optimistic. If she is ready to make an appearance before everyone, you can imagine how much courage that would take, and how brave she really is! Life is just like that. You would eventually have to face what comes. I truly feel that she is a courageous Shero. By being able to stand before everyone, it would mean that she is really ready. As to whether I will be worry for her? I will not be unduly worry. Because we will always be by her side, walking with her through this and the future. No matter what obstacles or challenges lie ahead, we will always be with her. Thus, I will not be unduly worry.”
Meanwhile Selina’s fiancé, Zhang Cheng Zhong, has also shared on her recovery progress via the internet. He said that Selina’s facial injuries are recovering better than expected and her hair has also re-grown. Although the scars on Selina’s body may take a longer time to fade, and she might have to endure stares from others; the best approach is really to face the present and future in a composed manner.
*Photo (Ella) credits to: Epoch Time
*Photo (Selina) credits to: Eastern Camel/Litao Shampoo Endorsement


Ella confirmed that Selina will leave the hospital