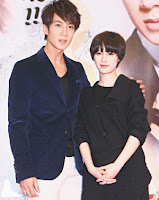 It's confirmed that Taiwan is shooting their TV version of Japanese manga "Absolute Boyfriend," a love story between robot and human, and the leads are Wu Zun, popular member in group Fahrenheit, and Goo Hye Sun, South Korean actress better known in the K-version of "Boys Over Flowers."

Yesterday the two idols met each other the first time in the press event for their new drama. Perhaps into his character already, Wu Zun was "behaving like a robot" in contrast to Goo's frank personality. Wu Zun wants to give a good impression since it's his first time working with Korean actress. But he was too polite that he even asked Goo's translator shyly "can I put my hand on her shoulder?" when reporters request the pair to stand a little closer.

Nudity is something pretty much everyone is concern about [In 'Absolute Boyfriend,' there are scenes where the robot Nighto appears topless, even naked. Of course, important part is covered!]. After watching the Japanese version of the drama, Goo immediately go to search explicit photos of Wu Zun had taken in the past, and she is very satisfied. "He has a good body, plus he is handsome," the actress praised. "And I'm very excited to see scenes of him going naked." That scared Wu Zun and he told her she doesn't have to answer questions like that.

After finishing Sunshine Angel just a few days ago here comes Chun's new drama, Absolute Boyfriend. Honestly, I am disappointed with this news. I want another CE collab. :( But since Chun has chosen to do this drama then I'm happy for him and will support his decision.
Posted by kimuchi08 at 5:02 PM