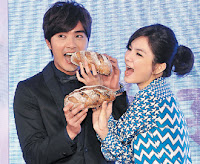 S.H.E’s Ella and Mike He have been filming the upcoming movie, “Bad Girl” since April of last year. Although Ella came out with the movie, “New Perfect Two”, during Chinese New Year, her first movie project and big-screen kiss was actually with Mike in “Bad Girl”. The soon-to-be married actress and pop singer told the media that she thoroughly enjoyed filming the kissing scene, “I greatly enjoyed those (Mike’s) soft pair of lips!”

Ella revealed that she was very stress a while ago and dreamed of herself showing up at the wedding in t-shirt and jeans, while her guests complained about the food. As a result, she decided to leave everything up to her management company to handle and she’ll just focus on being the prettiest bride on that day.

In the movie, Ella, Da Yuan, and Fang Zhi-You form the “bad girls” trio. They revealed that they had experienced in the past of being bullied by guys in school such as having their skirts ripped, being called names or made fun of. Their costar Mike quickly responded, “Actually, I hated the guys too when I was little!” However, he later admitted that he had done some bad things before when he was little.