Ella Chen reveals how she fell in love with boyfriend

The Taiwanese singer let on that she started to develop feelings for her current beau after he touched her leg
Source : xinmsn.com 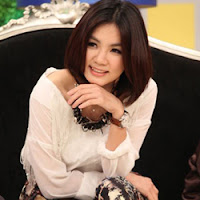 It appears that S.H.E member Ella Chen may be next in line for marriage.

Earlier in July, it was rumoured that the singer will be marrying her Malaysian boyfriend Alvin Ng next March.

Yesterday, while promoting her new movie Perfect Two 2012 with actors Vic Chou and Xiao Xiao Bin on talk show Here Comes Kang Xi, Ella opened up on her relationship with Alvin, after much demand from host Dee Hsu.

Dee's partner Kevin Tsai then reminded Dee that Ella had specifically requested them not to ask her any questions related to her relationship before the recording.

Since she could not make Ella confirmed if the latter was going to marry next March, Dee asked the singer how she and her boyfriend met instead.

"We knew each other for four years, but dated a year only. It happened after he accidentally touched my leg at a gathering with friends," Ella said.

When the hosts asked Ella what took them so long to fall in love with each other, she admitted, "We didn't have feelings for each other in the first three years. We were watching DVDs together at a friend's gathering, when he touched my leg and complimented me on my thin legs. I shivered, when his finger touched. The next day, I asked him out to visit children at a pediatric hospital."

The singer also shyly added that the couple is still in their honeymoon period.

"He knows it's my job. He accepts it, even though he may not tolerate it. He will choose not to watch," Ella replied when asked if her boyfriend minded the intimate scenes she had to film.

In other related news, Dee and Kevin hosted the recording yesterday, although Dee's elder sister Barbie Hsu was engaged to take over Dee's place, to ensure that the latter has sufficient rest for her pregnancy.

However, as Barbie once said that she will not interview any of her former flames, i.e. Vic Chou, Dee had to take over the reins.

During the recording, child actor Xiao Xiao Bin let on that Ella was jealous of him, because he had worked with all but one F4 member (he had acted with Jerry Yan, Vanness Wu and Vic Chou).

However, the young star shocked everyone when he said, "It's best if I don't act with that person (Ken Zhu)."

Responding to Xiao Xiao Bin's reply, Ken commented via his manager, "We're not taking this to heart, because he's still a child. Please tell Xiao Bin Bin to take care of his son."

I'm not surprised to know that Ella and Alvin are really together. In fact, I'm glad that Ella finally confirmed their relationship in a way. I'm genuinely happy for Baobei. Although for years I have been wishing that she is with someone else, that doesn't matter anymore. I've already accepted the fact that what I want for her isn't necessarily what's best for Baobei. The most important thing is Ella's happiness :) I support her decision fully. I wish you happiness, my Baobei!

Another thing, I think the way they started their relationship is pretty funny XD Not the most romantic thing but it's okay. I guess sometimes it only takes just one touch to realize something. I hope Alvin doesn't break Ella's heart. Ella deserves to be happy, to be loved. Please take care of her or else! A massive amount of S.H.E/Ella fans will surely attack you!

PS. Now I hope that Hebe will find her special someone too! XD
Posted by kimuchi08 at 11:24 PM