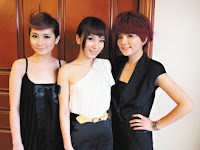 SHE is really the "Commerical Queen", it's only been 4 months into2010, SHE has endorsed 17 products between Taiwan and China, for a total revenue of NT 300 million. They've recently collaborated with Yoga Lin in the latest ad.

SHE did not release any albums last year, but with the release of their new album "SHERO". They are on a roll to grab more $$, SHE's endorsements varies from international drink brand, health products, mainland dairy giant company, communications products, as well as Taiwan Local skin care products, shoes, clothing, etc., plus the latest endorsement of jewelry in China has reached 17 ads.

SHE laughs, "The more the better, we're looking look forward to endorsing products such as shampoo and household appliances."

SHE also promote Yoga Lin (another artist at HIM) by including him in business performances, award ceremonies, and commercials. Working with SHE on the endorsement, he's earned Chinese Yen 1.5 million (about NT 6 million). They will also be holding a press conference on the 29th held in Guangzhou.

SHE's high-income is a result of their hard work. After participating in Beijing's music ceremony last weekend, with less than 3 hours sleep, they had to rush to Changsha to promote their new album. Despite the lack of sleep, SHE recently fell in love using photo shop software to edit their own photos. Ella has transformed into a rich and fat business man, you need to look closing in order to see Ella's features beneath the fat. Hebe has tranformed into "Little Michael Jackson" and Selina has transformed in a rich, old lady.
Posted by kimuchi08 at 11:06 PM