It's been more than 10 months since S.H.E member Selina Jen was severely burnt in an on-set accident last October. 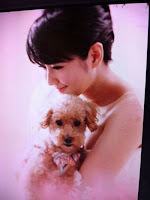 Her heath condition has been improving slowly and it was recently rumoured that Selina would be marrying her fiancé Richard Chang on Oct 31.

Before the accident happened, Selina had already shot a series of wedding photos, in preparation for the big day.

After the accident, the starlet shared that her body underwent major changes and decided to reshoot the photos, as a form of commemorating the turning point in her life.

At 3.27am, Selina updated her microblog with a photo of her in thick makeup. The picture was captioned: "Today, I put on thick makeup, bundled my newly-grown hair and wore the Vera Wang gown, which had been waiting for me the last six months."

This sparked speculations that the photo is part of a new series of wedding pictures.

"Ella cried and said I still looked beautiful. Richard cried, recalling the days when I was much more active. Dad cried and told me today is the 294th day [since the accident]," Selina wrote on her blog, revealing how her fiancé and father felt when they saw her in her wedding gown.

Previously, Richard said that the couple would announce their wedding date after a meeting with the hotel this week. However, there has yet to be an announcement.