A photo of Selina taken 3 years ago. 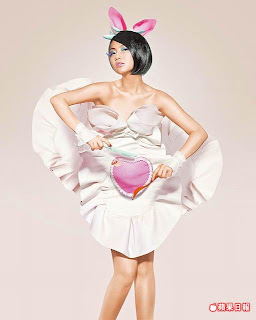 
The photographer especially chose Selina for this photoshoot named "Cake of happiness" because he thought Selina is the one in S.H.E, who doesn't have any worries and the one who is the most pure. In his eyes she is someone who would smile while waking up and also while working, someone who wouldn't have bad emotions.

The photo has never been exposed before. It was found again when he was preparing for the photography exhibition.

Selina has expressed on the wedding day she would like throw the bouquet to Hebe the most. She knows Hebe will panic at that moment and then Ella would have the opportunity to take the bouquet away from her, so she wants to get better so she can stop Ella from doing that.

Ella says she is a person who likes to mess with people but she wouldn't want to take something away from someone for real. Besides it would be embarrassing if she trips while trying to snatch it away. Ella also revealed her plans for next year she will release an EP and in May she will film a new film.