Wu Chun drops out of Absolute Boyfriend and remains without contract 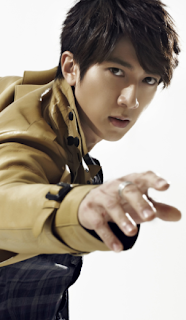 It's recently been revealed that Wu Chun's contracts with HIM and Comic had expired at the end of last year and there are no signs of him renewing the contracts after two months. He has stated before that the reason he would stop singing would be for his father. While there have still been promotions for a Fahrenheit album release, all the work Wu Chun has done for it was merely to fill the last of the requirements of his contract.

It has also been leaked that Wu Chun has dropped out of both his upcoming series (Absolute Boyfriend) and movie (Summer Holiday 2) leading to many speculations of him preparing to leave the entertainment industry. As of present, Wu Chun has expressed when interviewed that he has thought about leaving. For his fans, though, he will not depart rashly. However, he will not be putting his whole heart into the entertainment industry in the future.

In the five years he has been in showbiz, Wu Chun has only been able to take a vacation on New Year each year. This has been making him feel ashamed at the neglect over his own family and has previously been made to think about working less and spending more time taking care of his father. Wu Chun's father also hoped that his son did not have to work so hard and go back to Brunei to led a simple life. Thus, at the end of his contract last year, Wu Chun moved back to Brunei, and has been there since.

On February 13th, the third branch of Wu Chun's fitness gym opened and when he was interviewed then, he finally revealed what he was truly thinking. "I have always said that if I was happy doing what I did, then I would continue. If I wasn't happy, I would return to Brunei. Everyone knows that the entertainment industry isn't the only thing I partake in. The company has discussed renewing the contact with me, but I have not made a decision on my future yet, so I've been pushing it off." Wu Chun also emphasized that Brunei is his true home. Seeing how happy he was at being home, he was asked whether he really hadn't thought about leaving the industry to which he answered, "I do want to a little because I really miss my family. Since coming back home, I have been very happy, but also feel a bit guilty because I didn't take good care of my father in the past and wasn't able to accompany him to the doctors for his back and legs."

Thinking about the past five years, he said, "I originally had a pretty good life, but I also had a sense of accomplishment when living a life where I could take care of myself. At the same time, that satisfaction was cut in half. The half I lost was spending time with my family and my freedom. I actually don't have much confidence in my acting, most of the force that pushed me was from my fans, so I won't speak of quitting so easily. I will continue working, but I require a lot of freedom and will only take on jobs I like." Regarding work in the entertainment industry, he said, "It requires sacrifice. I really cherish everything that I learned each day while working. It will be helpful in all the decisions I make in the future. Even if it will be hard, I will face everything with a positive attitude."

Could this really be the end of Fahrenheit?
Posted by kimuchi08 at 4:51 PM